Authentic Freedom: To Be Ourselves 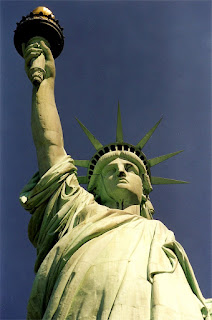 I once knew a junior boy whose parents let him do whatever he wanted. He could come and go as he pleased—no curfews. If he did poorly academically, there were no punishments. His family was wealthy and he got pretty much whatever you wanted. As you might guess, this young man began to get into trouble--he began drinking too much, started smoking pot, his grades got worse and worse.

One time, after he had skipped school and we caught him, he told me in my office: “My friends think I have the perfect life—I can do anything I want, I get whatever I want and my parents don’t give me any flack. The funny thing is, I’d trade places with them in a second. I’d rather have parents that fuss at me, that get mad at me when I get bad grades, that make me study when I’m too lazy. Look at my life, Mr. Weber. It sucks. I am a terrible student. I’m going to have to go to a crappy college. I don’t have any real friends—just people that want to come over to my house so they can drink and not get in trouble.”

And then he looked at me with his watery eyes: “ This weekend, I didn’t come home on Friday night. Didn’t come home on Saturday. Finally showed up on Sunday afternoon. We’ve all got cell phones, but NOT ONCE did I get a phone call from Mom or Dad asking where I was or what I was doing. I’m not even sure they noticed I wasn’t home. They could care less”.

Compare this kid to most of you: Your parents are on you to do well, checking your grades frequently. You have curfews. You have responsibilities and duties around the house. You're active in the extra-curricular life of JPII—play a sport, involved in some clubs—all of which place demands on your time. In fact, you don't have much free time, but as a result of your hard work, you're doing well in school, and it looks like you'll be able to go to a good college, maybe even on scholarship. You're generally happy with where your life is going and you feel proud of what you've accomplished.

So which of the two, the junior boy who could do whatever he wanted or you, the typical JPII student, at the deepest level, is MORE FREE?

We tend to understand freedom at a very superficial level in our American society: as the license to do whatever we wish, provided it doesn’t infringe on the freedoms of others. It is freedom FROM rules. Rules are viewed as obstacles that inhibit our autonomy. As John Locke argues, we submit to these rules as part of the “social contract” only because we believe they are necessary to maximize our individual freedoms in the long run.

But we find, like the junior boy, that doing whatever we want doesn’t leave us very free after all –in fact, the reality is that if we live simply to fulfill our most immediate desires, unfettered by commitments to what’s right and what’s wrong, we end up enslaved—and certainly unhappy.

There is an older and deeper understanding of happiness dating back to Aristotle that argues the “good life” isn’t one that hinges on autonomy, but on moral virtue. If we conform to the moral law, and regard those laws as guidelines or prerequisites for living, we are able to fulfill our natural destiny—free to become the people we were intended.

The moral law is like a fence that gives us parameters within which we can operate. Understood correctly, this fence makes our freedom possible rather than inhibits it. When my children were young toddlers, we lived in a house with a full fenced back yard. They loved playing in that back yard, secure from strangers, exploring all its outer limits, playing hide and seek, acting goofy, being them selves. A few years later we moved to a house with a bigger back yard but no fence. In theory, there was more room to play, but without a fence, my children didn’t feel secure, didn’t feel safe from the neighbors, didn’t know where our property ended and our neighbors began, so they played it safe staying huddled around the back porch.

Moral laws allow us to become more fully ourselves.

Without such fences, we live with uncertainty and confusion about how far our liberties extend or how quickly they interfere with the liberties of others. Rather than resolve this uncertainty, our tendency is to figuratively huddle at the back porch, or literally, to retreat to our homes, isolating our families from the neighborhoods and the communities in which we live.

In fact, if you were to fly over affluent neighborhoods 30 years ago and did so today, you’d notice two striking differences. First, you’d see swimming pools with most of the houses, instead of neighborhood community pools from yesteryear. Second, you’d notice many more privacy fences. These 2 developments make sense: If we can’t agree on a moral code or a set of obligations that binds us, then we’ll inevitably fragment ourselves into ever smaller enclaves to live out our private visions of truth.

One of the great things about being part of a school community here at JPII is we do live within a community with a clear mission, with a clear moral code, clearly written guidelines about what is right and what is wrong.

Let me give you an example: Veritas. If you’ve been following the thread of my argument, Veritas, like all moral codes, is designed to bring out the best in you, to challenge you to live authentically and truthfully. But from the beginning, Veritas was meant to be a student honor code—not something that was imposed purely from the top down, run merely by the teachers or school admin. It won’t work if that’s all there is to it. That’s why there is a Veritas Council composed of students and why those of you accused of a Veritas violation can make your case to this Council. That’s why students are asked to sign their own names, saying they’ve not cheated. It’s very different than other schools, in which all cases of academic dishonesty are 100% handled by the administration.

For Veritas to work here, there has to be student ownership. There are three levels to that. First, it means, most fundamentally, that you have to live by it yourself—by doing your own work, by citing sources if you pull off quotes from the internet, by not getting answers from others on a test, by making sure your signature of Veritas means what it says. Second, it means you won’t help your classmates cheat. And finally—and this is more difficult—it means if there is cheating which is wide-spread or frequent, you’re willing to take some steps to correct it. I’m not asking you necessarily to name the people cheating—but alerting the teacher or admin that cheating is occurring. You can do that very easily, anonymously, by going to our web page and sending something to us via feedback. The teacher will be alerted, which may then prevent it from happening again.

Cheating hurts everyone. Even if a teacher doesn’t base a grade on a curve, when kids cheat, grades become inflated, and most teachers will compensate for inflated grades on one test by giving a more difficult test the next time through.

So on this first day or the 2nd semester, this first day of school in 2009, this time of year where it is common for us to make resolutions to improve ourselves, I challenge you to live morally, to live honestly, to live authentically. When we do that, we become truly free to be the kind of people God intended us to be, free to be ourselves—and therein lies our happiness.
Posted by Fnwchs at 11:58 PM