Note: These were my remarks to our newest National Honor Society class, inducted on March 16, 2022

Students, on behalf of our teachers and St. Michael Catholic High School, congratulations on this significant honor tonight.  We are a small school, and we know each other well. That your teachers think so highly of you speaks volumes.

Let me share with you why I think National Honor Society is so important. 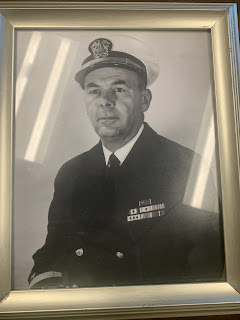 Before I was a principal, I was a theology and English teacher.

One day, a student asked me,” Mr. Weber, why do Catholics make such a big deal about the saints. I mean they’re dead, right? Shouldn’t we be looking to the future and not the past?”

It was a good question—he wasn’t being snarky. I could tell he meant the question seriously.

I thought for a moment, then said, “For the same reason I have a picture of both of my grandfathers.” One was a chair of the school of orthodontics for the University of Tennessee for 30 years, and the other was a Naval Captain, who fought in WWII and later retired as an admiral.

Why keep their pictures? Because they were both deeply ethical men who began their careers at the bottom of the ladder, and through hard work and the respect they gave and earned from others, rose to the top of their profession. Their pictures remind me of where I came from, who I am, and what I am called to do.

But it’s even more than a reminder—the fact that my grandfathers lived this way helps me, inspires me, and pushes me to live the same way.

And that’s why Catholics honor the saints—not out of a morbid fascination with dead people, but to remind us of what it looks like to live a virtuous life, and to inspire us to do the same.

You see, we’re not very good at thinking about abstractions like sacrifice, or honor, or love. We live in a world of distractions, and our minds quickly drift away when we’re asked to reflect on these ideals. But when we SEE an honorable man do honorable things, when we WITNESS someone really sacrificing, when we are IN THE PRESENCE of two people who truly love each other, these virtues become real to us. We are inspired to live similarly. 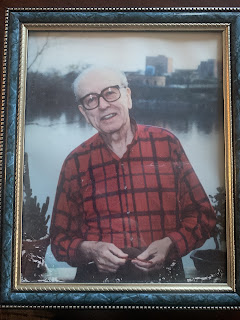 Which brings us to the reason we honor you tonight: Yes, we want to recognize what you have accomplished in this life and praise you for it. But much more importantly, we commission you to become EVEN MORE of a leader in this school and in our community, EVEN MORE a scholar, EVEN MORE a person of high character, willing to lead and inspire your friends to those same ends.

Our world needs flesh and blood examples of virtue more so today than ever. Your classmates need you to stand strong, and to encourage others to stand strong. If the saints can inspire us to do these things, how much more can you do so as living, breathing examples to your peers?

My congratulations as your principal for all you have done. It’s nice to be recognized, and you deserve it. But the pledge you took tonight— not just to maintain the ideals of the NHS, but to encourage others to live that way, too—is an important commission. Our world, our school, and your classmates need you to lead others to those ideals.

May God bless you. If you seek his will, He will always give you the strength to follow it.

Posted by Fnwchs at 8:08 AM No comments: 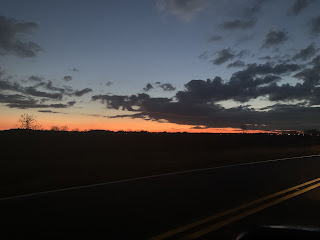 (My talk with students at school assembly, March 7, 2022)
In our Ash Wednesday readings to begin Lent last week, Jesus tells us not to act “gloomy” in our fasting and almsgiving as the hypocrites do, seeking the acclaim of others.

“Gloomy” is an interesting word. It’s close to being a onomatopoeia, a word that forms a sound like it means, such as “sizzle,” or “pop.” “Glooooooomy” almost makes you depressed just saying it.

It's easy to be gloomy at this time of year.  Even today, it’s a bit overcast, and we’re just starting Lent, a season of fasting and almsgiving. Easter and Easter Break are a long way off.

Gloomy people are unattractive for a number of reasons. When we are at our gloomiest, we are at our ugliest. Our face contorts, our shoulders slump, our “vibe” is bad, and worst of all, our gloom brings others down. People don’t want to be around gloomy people—they are like dementors from Harry Potter that suck out our souls.

My wife and I were watching a TV show recently, and she said, out of the blue, “That may be the ugliest actor I’ve ever seen.” I had not noticed, but as I relooked at him and thought about it, I could see what she meant! But over the course of the show, he was transformed, and part of the “technique” he and the director used to convey that transformation was he began to smile more—and when he smiled, his countenance changed, and he became much more pleasant to look at.

We’ve all seen the “before” and “after” pictures when companies advertise the effectiveness of their diet plans. Notice that in the “before” pic, the person is always portrayed as unhappy, frowning, face contorted,  but in the “after” pic, he or she is always smiling.  Smiling makes us more attractive.

As it turns out, joyful people are magnets. They lift up our spirits. There’s a kind of radiance on their faces.

God wants us to be joyful!

Actually, we CAN help how we feel, and Jesus gives us that secret “life hack” as to how, over and over again in the gospels:  “Do unto others as you’d have them do unto you.” Put others first, he says.  Turns out when we do that, it changes our mood. It makes us smile more. Other people want to be around us more. We feel more powerful in that we can impact more people.

Psychiatrists call it “bracketing,” when we can put ourselves off to the side, focus on others and enter into someone else’s world on his or her terms.

I once listened to a beautiful piece on public radio about a middle aged man who took in his mother in law with severe Alzheimer’s to live with them. Alzheimers is a deterioration of the brain, where a person loses his or her memory, and in so doing, loses any real sense of self. His mother in law had been a very conservative, Christian woman, but in her advanced stages, she had taken to cursing. “I want some more ice cream, “ she’d say. Concerned for her weight, they’d tell her, “Mom, we’re all just having one serving." “ Give me more god d——- ice cream!” she’d scream back, in the presence of their young children.

And they found themselves often needing to correct her. Pointing to a picture on the wall, she’d say, “President Reagan was a good president.” But they’d respond, “Mom, that’s your husband of 45 years, named  Jim. That’s not President Reagan.” And she’d always be unhappy, constantly getting it wrong. Which would make her curse all the more.

It got to the point that they didn’t know what to do, and they were thinking of moving her to a nursing home.  But they began reading on caring for Alzheimer’s patients, and one of the books recommended “bracketing,” or moving into her world, however fantastical, however non-sensical, and engaging with her on her terms.

Shortly thereafter, their mother looked outside at the birds in the trees, and said “Look, the monkeys are back.”  The son in law, almost corrected her, then remembered, and said “Back already? It seems like they’ve come early this year.” “No,” she corrected him, “this is about the time they always come. I wonder why they’re not wearing any clothes.” “Should we try to dress them?” He continued. “No, no, she said, “they’re too messy.  And so went the conversation. But at the end of it, the mother felt better about herself—she’d had a real conversation with someone. It was healing. The more they "bracketed," the less she cursed, and the happier she seemed before she eventually passed away.

I was very moved by this story—about a husband's love for his wife, so much so that he was willing to take in his mother in law with severe Alzheimer's, and his kindness to her in her advanced state.

But we can “bracket” too—though not as profoundly—by simply putting our egos aside and engaging with others on their terms. Doesn’t need to be too profound: “Hey, great hit last night. “ “Hey, that comment you made in class was really. Interesting, I’ve been thinking about it.” Or, “That’s a really nice shirt, or dress, or ensemble you’re wearing. “Hey, can I help you with that?”

Heck, we can just smile at people more, even if we don’t feel like it.

Here’s what happens. When we do that, when we focus on others, we become more joyful people. Our countenance changes. Smiling begets more smiling. Our faces become more beautiful, and we become more attractive to others.

May all of us become less gloomy this Lent by becoming more other-centered.

Posted by Fnwchs at 9:30 AM No comments: