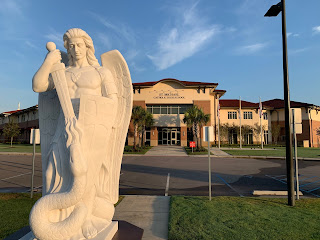 This is my talk to students at the beginning of the 2019-20 school year.

Good morning! I have 3 thoughts I want to share with you to begin the year.

First, upperclassmen may remember me saying this last year, but I think it bears repeating. I know it sounds a little odd when a principal tells you this: I hope you fail, and fail often this year.

Let me explain--I am not a masochist that takes pleasure in your pain! Do you remember the first time you've ever went roller skating? It's not hard to pick out the first-timers: they're the ones clinging to the rails all the way around the rink. If you remember, it's a little embarrassing, especially since kids much younger than you are blowing by you, weaving through traffic, backwards and forward. At some point, if you're going to have any fun at all, you have to push yourself off the rails and risk a wipe-out. The first time I did it,  I got about 20 feet before making an ugly, spectacular fall, feet first, landing hard on my backside. So what do you do? You go back to the rails, regain your balance for a bit, and push off again. And maybe you get a few feet farther this time, before crashing again. And so on and so on.

High school, too, is a time to push off the rails--and in so doing, to risk failure. Maybe you volunteer an answer in class when no one seems willing to do so. Maybe you try out for a team, even at the risk of getting cut. Maybe you enroll in an honors or A.P. class for the first time. Maybe you ask a girl out, even if she might say (kindly, I hope girls!) no thank you.  The willingness to risk failing is a sign of courage and health, and it's the only way we grow and make life interesting.

Do that here. I am proud of this school, because I see students doing that every day, and I see a student body that doesn't jeer at them, but respects them. I think of people like Connor Robitaille who joins the cross country team, or Lachlan McAloon who runs for student government, or Maeve Andrews who joins the bowling team, or Marc Nyantaski who stands before you and raps about being a Christian,  or those of you who performed in the talent show last year, or all those of you who have joined a sport that you've never played before.

Let's keep being that kind of school. I want to encourage you to try new things, join new clubs, stretch yourself-- and when you fail, dust yourself off, go back to the rails to regain your balance, and push off again. And I want you to continue to be a student body that respects your classmates when they take these risks, encourages them and supports them. Have the courage, St. Michael students, to fail often!

Second, don't be the first one going south down Higbee Road every day after school. If you're rushing out of here each day at dismissal, I predict high school is going to be dreadfully boring. Instead, get involved in things. School is school, and we'll make it as interesting as we can, but sometimes it's just hard work. But the joy of high school is in the friendships, and those friendships are formed when you are team-mates with someone, or you're involved in a club with someone, or you sing or play in the band with someone.

Join up. In a couple of weeks, we're going to have "Club Rush," where students put out tables and invite you to become active in their clubs. Sign up for 3-4 things, try them out, see what suits you. Start a new club--we're still new enough that you can do that, if you can also find a faculty sponsor. And come to ball games to cheer on your team! We play our first home football game on Thursday, and I hope to see all 323 of you at the game.

If you want to be UN-boring, then live for others. Serve others. Listen to others. Note your classmates who are lonely, or sitting by themselves, or having a tough day and reach out to them. Invite them to sit with you. Invite them out with your friends at night. These are the people with many friends. These are the people that if there's a big room, with many people standing around, are the ones surrounded, having conversations, laughing.

You see, God made us this way. We are happiest not when we GET something, but when we give. We feel better about ourselves when we do, and others feel better about us. And if you REALLY want to live an exciting life, give yourself to God. Say to him, as Jesus did, "your will be done." That's where the adventure starts!

Since boring people think about themselves constantly, they have their lives all mapped out. They can tell you who their friends will likely be, the school they'll attend, the kind of person they'll marry one day, the job they want. As if THEY were in charge of each step of their journey.  But when we live for others, when we say to God "your will be done," life is full of surprises, which brings us enthusiasm and excitement to our lives.

In closing, when Archbishop Rodi named our school "St. Michael," he said one of the reasons was to honor the first bishop of Mobile, Michael Portier. When Michael Portier was ordained a priest, as he lay prostrate on the floor at St. Mary's seminary in Baltimore in 1818 as part of his ordination ceremony for the priesthood, he prayed for "good health and the zeal, always and everywhere, to spread the sacred fire." As you begin this new year at St. Michael, I pray that all of us--you, our teachers, our staff, myself--catch this same fire that excites us, that ignites us, to serve God in all that we do.

May God bless you this year!