This is Mr. Weber's New Year's assembly address to JPII students on January 3, 2013.

I hope all of you had a wonderful, restful Christmas and were able to spend a lot of time catching up on sleep, visiting with your family, and slowing down.  On behalf of the faculty and administration of JPII, I wish you a blessed new year and pray that 2013 will be a year of joy and peace for you and your family and a time of great personal growth as students, as Christians and as young men and women.

Just before exams last month, an almost unspeakable national tragedy occurred in the small town of Newton, Connecticut. A twenty year old boy walked into Sandy Hook elementary school and gunned down 20 children, ages six and seven, as well as six adults that tried valiantly to protect them, including the principal, the school psychologist, and four teachers or aides. Moments before he entered the school he had murdered his mother, and after massacring the children at the school, he committed suicide.

It’s impossible to make any sense of that.  People have tried. I will not.  It is a horrible reminder that despite the fact that most people are good and decent, evil is still real and our world is still broken, in need of redemption and healing. 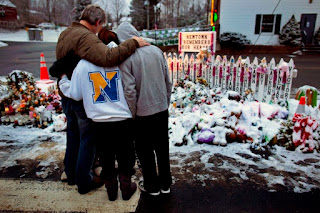 It is also a reminder that each moment of our life is precious. I heard a talk recently in which the presenter told the true story of a woman he met who survived Auschwitz, where so many Jewish people were gassed to death during World War II. This woman was 15 when she was herded up by the Nazis and placed on a train with her 8 year old brother. They had been separated from their parents. During the long and horrible trip on that train, she noticed that her brother didn’t have any shoes on, and she chided her brother like an elder sister might: “You’re so stupid—why can’t you keep your things together, for goodness sake?” It was the last time she ever spoke to her brother—she never saw him again.  He did not survive. When she left Auschwitz, she made a vow, saying she “walked out of Auschwitz into life. “ The vow was “I will never say anything to someone that couldn’t stand as the last thing I’d ever say. “

We grieve for the mothers and fathers, the sisters and brothers of these children who were killed in this national tragedy at Sandy Hook.  I suspect that some of older brothers and sisters of these victims, too, had fussed at their brother or sister that same morning, maybe as they were getting into the car for school that day. I am sure they’re eaten up with guilt and regret, wishing with all their hearts that they could take back the cross words that would be their last exchange together. Pray for them.

There are a lot of people making new year’s resolutions this time of year. Gym memberships are swelling as people try and lose the weight they’ve gained during the holidays. Might I suggest that we resolve to do our best to live by the vow of the Auschwitz survivor—that the words we say to each other might hold up as the last things we’d ever say?  Will we always be successful in this? No, we won’t. But it’s worth living for.

I think, too, the lesson from this national tragedy is that we have to look out for each other. We’ll be reviewing over our emergency lock-down procedures these next few weeks, and we’ll be practicing them with you. Look for that very soon. But no plan, no security system, no protocols can guarantee our safety. What’s most important is that we talk with each other, and take a kind of “neighborhood watch” approach--all of us looking out for each other. If you have a friend who is struggling emotionally, talk to an adult you trust and share your concerns with him or her. Don’t worry about that person all on your own.  The sooner that person gets help, the less wound up her or she will get.

I ask one thing from you now. As you know, our doors lock as the school begins each day. Unless that person is a student in JPII uniform, do not open our back doors for visitors. If you think it might be a teacher or staff member, teachers have keys, so you don’t need to open it for them. All visitors are supposed to go through the front door by the flag pole and check in with the office, so send them around. Yes, I know you want to be kind. But just like airline security procedures create a little inconvenience for all passengers, so too must we all insist on front door only.

Work hard this semester. May God bless you in 2013.