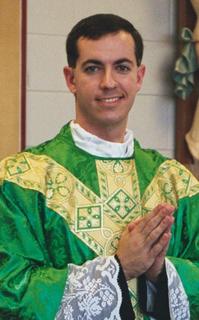 One Friday afternoon not so long ago, I was observing classes and came to Fr. Labadie’s sophomore Catholic Doctrine class. Suffice it to say that a doctrine class doesn’t normally make a 15 year olds’ top ten list of places they’d like to be on a Friday afternoon, and to make it worse, they were apparently reviewing for a test. Fr. Labadie was pulling out all the stops to keep their attention. He was standing on top of his desk, peering over the edge, crying out in mock pain: “Rebecca, if you don’t know the answer to this question, I’ve failed as a teacher and I’m going to jump”. Everyone watched with anticipation and amusement, hoping Rebecca would get it wrong.

The Fr. Labadie I will remember was this teacher—energetic and creative. Folks often ask me what makes a good teacher, and I say they need to have two qualities: they must know their subject matter very well, and they must have that hard to define “with-it-ness” – a certain quick-wittedness and quirkiness—that all good teachers seem to possess. Fr. Labadie had both.

He combined them with a real zeal to serve the Lord and his Church. He attended ball games. He could talk sports with the boys and tease with the girls. He heard confessions. He said Mass and gave thoughtful, passionate homilies. A black woman, hearing him preach one day, told me “he had the anointing”. Students loved him.

I suppose the “why” question is inevitable at moments like these, but like Job, we get no answers other than God’s ways are not our own. Still, it’s easy to second guess: earlier that day, he had called me and talked on the phone about teaching in the fall: Yes, I was hoping he could be our chaplain, yes, I’d like him to teach a couple of classes. Yes, I hoped that he would be assigned as an associate in a local parish. “Idleness is not good for us men” I had joked. “We need to stay busy”. He laughed and agreed with me. All lights were “green” for this fall.

Well, not all the lights.

Here’s what I do know: Despite his talents and faith, Father Labadie was sick with depression. He had been sick for a long time. Like most men that I know (I could see myself doing the same thing), he tried to deny his sickness was mental. If he ate differently, he would be OK. If he got more sleep and exercise, things would work out. If he could get the right prescription, perhaps that would work. But it was slipping away. He missed classes, was late for appointments and was increasingly unable to do the most ordinary of things. By January, it was apparent that something had to change. He couldn’t remain a teacher without getting well. The archdiocese sent him away to get well.

Fast forward four months, when Father Labadie came to our graduation in late May. He wanted to be with the first class he taught at Catholic. He looked so much better. He had gained back weight that he lost. He seemed more alert. He was happier. Yes, he said, he had been sick, but he was almost better--just a few more weeks in the program. He was eager to return to teaching. He missed the students and they missed him. After visiting with them, he went back to the program to finish the business of getting well.

Now, here at the end of June, he returned as part of his program’s “therapeutic week”. Visit your home town for a week, make arrangements for your support group, get things in place, and return back to the program for the final two weeks to discuss things and make final preparations to get on with living. That’s why he had called me about the fall. He was making the arrangements, eager to get on with living.

Until early that next morning.

One of the more helpful remarks that I’ve heard as I’ve mourned his loss with others is that battling depression is a lot like trying to balance in the midst of waves. Just about the time you get your balance, a large wave comes and knocks you off your feet. You didn’t see the wave coming.

That wave hit Father Labadie on Monday night. It wasn’t premeditated. It wasn’t planned. Everything in his life these last five months was about planning the opposite: to get himself well enough to be in the classroom again, standing on the edge of that desk and pulling out the stops to teach the faith to others. That was his love and his passion. He became a priest to bring others closer to the Lord. He did that here at Catholic in the short time he was with us.

If there were any doubt as to his effect, one need only have been in our high school since Tuesday. As word of his death spread in our student community, streams of students began visiting our chapel to pray for him and his family. There was a board outside our chapel, in which students were invited to write notes. One note struck me hard: "So here we are Father, doing as you taught us to do, coming to the Lord to pray when we're hurting inside."

Their prayers are an eloquent eulogy for a young priest who lived too short a life.

In the end, as to why, I have no answer--only the answer of our ancient faith:

“I believe in the communion of saints, the forgiveness of sins, the resurrection of the body, and life everlasting. Amen. “