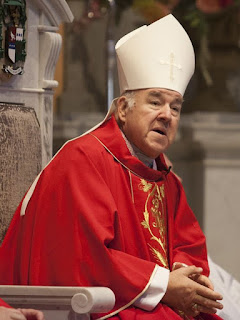 I was nervous when I first met him. It was the spring of 2008, the last leg in the hiring process to become headmaster of Pope John Paul II High School in Nashville.  I was pretty sure my Iphone had given me bad GPS directions, as it landed me in a neighborhood somewhere in Hendersonville, TN, eighteen miles north of the Chancery.  I came to a cul-de-sac, and I sat there in my car, staring at a two story home, uncertain. I decided to ring the doorbell. An older man answered the door, wearing casual clothes. I remember stammering. “I am probably in the wrong place.” “Probably not,” he said with a smile. “Are you  Faustin?” “Yes, are you Bishop Choby?” “I am”, he said warmly. “Welcome to my home. Want some coffee?”

The interview was nothing like I expected. He never asked me about my philosophy of Catholic education, how I intended to run the school, the kind of teachers I might hire. Instead, he wanted to know about my wife and kids. He asked me what would make the move from Montgomery, Al difficult, and I told him that my wife’s parents, who lived there, were sick. He was very interested in them (and I remember three months later, when he first met my wife, he immediately asked her how they were doing.) I did most of the talking.  At the end of our meeting, he stood up, gave me his cell phone number and said, “If you need anything, call me. Welcome to Nashville.”

Whatever anxiety I had about leaving my previous school of 23 years and moving to Nashville vanished that morning.

Because he was so accessible, and because he moved to a house literally in front of the high school, I came to know Bishop Choby well during my seven year tenure as headmaster of the school. He was a guy’s guy--he never liked talking about his physical health which had begun to fail him--and he’d quickly dismiss any concern directed to that end. He was a true southern gentleman, raised in Nashville, which meant he spoke VERY slowly, but that belied an agile mind, and he was careful with what he said and didn’t say, cognizant that he was bishop. He saw humor in things, and with a twinkle in his eye and a modest smile, could tell an excellent story. Even so, though he was always the most important person in the room, you got the sense he didn’t think that way about himself, evidencing a true Christian humility, listening well to what others had to say, and in so doing, challenging through his example those of us who (like me) talk too much.

When my wife’s father died in 2010,  Bishop Choby called me on my cell phone and asked if he could talk to her. He told her he was sorry for her loss, and consoled her, saying he’d pray for her and her family.  I remember her family was stunned when she told them that was the Bishop of Nashville she was just on the phone with,  and that he was praying for them. He did the same thing when her mother died in 2011, and then again with me, when my father passed in 2014. Perhaps for those who have grown accustomed to his leadership as bishop, these kind of outreaches do not seem as remarkable as they truly are, but such was his “style” and the constancy of his pastoral care.

He rarely substituted his judgment for those whom he hired in Church ministry, allowing the various ministries within the diocese to run as their leadership saw fit.  He trusted Therese Williams, my boss as superintendent of Catholic schools, Bill Whelan, the CFO of the archdiocese, and perhaps most of all, his pastors at the local parishes.  He trusted me as headmaster, and my colleagues at Father Ryan, Jim McIntyre and Paul Davis. Allowing the diocese to be run as independent institutions occasionally led to messiness and some inefficiencies, but I think he made the deliberate choice to live with some of that because he honored the principle of subsidiarity and had faith in his people. I certainly felt his faith in me as leader of Pope John Paul II High School and reveled in the freedom he gave us to create a unique, interesting, and in the end, excellent Catholic school.

We are tempted today to measure leadership purely by the number of programs someone starts, or by efficiency measures, or by quantifiable results. Bishop Choby was not that kind of a leader, and though he never said so to me directly, I am pretty sure he abhorred any notion of a “business template” as a measure of Church ministry. Instead, he was first and foremost a priest and a pastor, which meant he cared about people and relationships before anything else, and gave himself to others, one person at a time.

The diocese of Nashville lost a good bishop and a really good man on June 3. But I suspect many would say, as I do, that they lost a very good friend as well. May God reward him generously for a life well lived.
Posted by Fnwchs at 9:59 AM