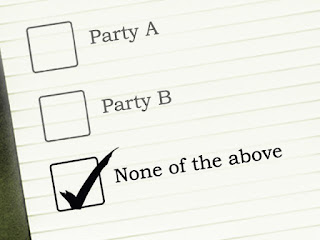 I just finished watching the second of two presidential "debates," during which both candidates hurled insults at each other. There were virtually no policy positions discussed.  Comedian Jim Gaffigan nailed it when he tweeted, "I feel like I am watching America's funeral."

Like so many others, I am deeply troubled by our choice for president. Hillary Clinton is avowedly pro-abortion, has repeatedly lied to the American people (including families of those who died in Banghazi), has required massive contributions to the Clinton Foundation as a means for wealthy persons and foreign governments to have access to her while she was Secretary of State, and has violated numerous statutes in handling top secret information on her private server. Donald Trump is a loathsome human being, whose misogynist bragging about his sexual exploits, his shocking lack of interest in educating himself about international politics, even after he emerged as the Republican nominee, his bullying tactics of not paying subcontractors what he owes them, and his bilking of ordinary people through Trump University make him a repugnant option.

If you’re truly IN FAVOR of one of these candidates, and not simply choosing a “lesser of two evils” candidate, I question how you can credibly dismiss these negatives, but this article is not for you. Rather, I wish to challenge the “lesser evil” (LE) argument for this year’s election and advocate for “none of the above.”

Proponents of the LE argument say it’s a binary choice, and that not choosing for one is a vote for the other, or a meaningless gesture that shuns one’s responsibility to make the “hard choices” that our democracy sometimes requires. But this is illogical. It’s not a binary but a tertiary decision: choosing “none of the above” is a third option, and a significant one. There’s a big difference between giving someone a + 1 in their vote count, and giving both candidates, in effect, 1/2 a point.

Second, I believe the LE argument is misapplied here, at least as understood in traditional ethics. “Consequentialism” measures the morality of an act purely on the basis of its results, independent of the “act” itself. Consequentialism believes “the ends (can) justify the means.” By contrast, a “deontological” ethic tries to measure the morality of the act based on the character of the “act” itself—is the act good or bad intrinsically? Traditional ethics, as best articulated by the Catholic moral tradition, is partly deontological, with a clear focus on the  “means”-- the act itself must be good (or at least, neutral), even while the intentions of the actor must also be good (seeking good results). The LE analysis only comes into play when we are trying to weigh the unintended bad consequences of a "good" decision, such as the decision to intervene in a foreign country to protect citizens against terrorists, even if such an act inspires more terrorists. We weigh the "evil" of allowing terrorism to trample upon human life vs. the unintended "lesser evil" of the resentment an intervention inspires, choosing to protect innocent life and tolerating the lesser evil.

I believe this is a historic election in that the very act of voting for either candidate is in itself a “bad” act, prior to any speculation of results or how much harm they will cause. Mrs. Clinton’s support for abortion is so consistent, so virulent and so fundamental to her political identity that I believe an affirmative vote makes one complicit in this enterprise. A vote for Trump is a decision that elevates a misogynistic, pugilistic and unbalanced egomaniac to the most powerful position in the world—a clearly “bad” act in and of itself, apart from whatever damage he is certain to do.

Choosing between them, then, is to choose “bad” in the hope that one will prove  “less bad” in the end. Were that choice literally our only option, I might concede its necessity, but it’s not the only option. We can choose not to choose—to say, without apology, that a vote for either is so antithetical to our values that we refuse to be complicit in their ascendency to this high office.

I also disagree that “none of the above” is a meaningless gesture or abdication of responsibility. Here’s why: There is no way to distinguish between your “LE” vote and the those who truly favor the candidate, but rest assured, the winning candidate will use the vote total as a “mandate” to push his or her agenda as forcefully as possible as president. But if you believe both candidates are so repugnant that your real reason for voting for one is to vote AGAINST the other, then you should want the winner to have as little mandate as possible. Could either claim to have a mandate if 10 million fewer voters chose “none of the above”? I doubt it.

That wouldn’t be such a bad thing. Perhaps the next four years will be an opportunity for Congress to truly regain its footing as an equal partner in the “separation of powers” as envisioned by our Founding Fathers. The executive and judicial functions have increasingly usurped the legislative function in our federal government, and a president with historically low support could embolden senators and representatives to begin to reclaim what they’ve abdicated.

Given who will be our next president, let’s hope so.
Posted by Fnwchs at 11:27 AM

Email ThisBlogThis!Share to TwitterShare to FacebookShare to Pinterest
Labels: 2016 presidential election, None of the above, Trump vs. Clinton