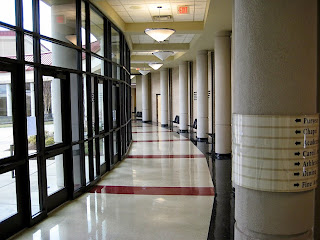 Student assembly address, my last as headmaster of JPII

Yesterday was Mother’s Day, so I thought it appropriate to share three stories about mothers facing difficult circumstances that I came to know in my role as principal.

In the early 1990’s, I substituted for our freshman Geography teacher some time in early September. She was teaching students  to understand maps, and as one of the first assignments, she wanted them to map out our campus, which was pretty easy, because at the time our campus consisted of two buildings: a long, narrow rectangular main building that ran horizontal with the street, and a rectangular gym behind the main building, perpendicular to it, to the left, in effect making an "L." So we went outside and studied it for a few moments, then came back inside and students drew what they saw. There was one kid in the class, we’ll call him Jim, who handed in a “map” with two perfect squares on top of each other. It wasn’t even close to being correct. So I suggested he go outside and look again. He did so, then came back and drew a square and a circle on top of the square.  He just couldn’t see it, and I remember thinking, Jim had very little chance of making it through our curriculum.

But I had not yet met his mom. She was amazing. She knew her son had serious learning disabilities, so every night she sat down with him,  reviewing what they had studied in school that day, helping him with his homework. She didn’t want her son to be treated any differently than anyone else, and she asked for no “favors” or considerations from Jim's teachers, telling me once “When my son has to get a job, he must compete along with everyone else, and he won't get accommodations.”  For sure, Jim struggled during his years of high school, and along the way, failed many tests, and even had to go to summer school for a few of his classes. But his mom kept him from feeling sorry for himself, kept him from giving up or getting discouraged, and because of her, Jim became an alumnus of our school.

Second story: I received a tip from students that a junior boy, Joe,  was selling marijuana at our school, so I pulled Joe out of class and asked him to empty his backpack. Sure enough, he had a substantial bag of marijuana in his bag—too big for his personal use alone. Add to that there were smaller plastic bags in his backpack to be used, obviously, for distributing and selling smaller amounts.  “What’s this?” I asked, already knowing the answer. Joe thought nervously for a moment, then set his jaw, steeling himself for the lie. “I have no idea, Mr. Weber.  Someone must have placed it in my bag.” “Why would someone do that?” I asked. “People don’t like me, I guess.” And so we went back and forth for a while, and as he continued to weave together this long lie, he became more confident, even cocky, admitting no wrong doing.  I brought in his parents, and began asking him the same kind of questions in their presence, getting similar answers. Finally, his mother, with fire in her eyes, looked fiercely at her son and said, “Joseph, cut the crap. You are my son. Our family isn't perfect, but we're not liars. You tell Mr. Weber the truth.” And as that  young man looked into his mother’s eyes, he crumbled, teared up some, admitted he was selling and told us the whole story.  Yes, I had to expel him, but I am happy to report there's a good ending to the story: Because of this mother and her insistence that her son be truthful and take responsibility for his mistakes, that hard moment served as the beginning of a real turnaround in Joe's life. He's now happily married with children of his own.

Third story: There was a senior boy, CJ, who played basketball in our school—one of the best athletes in the school. He had been raised all his life by his mom; his dad left them when he was an infant. She was a nurse and worked extra shifts so she could pay for her son to attend our school. She was a tough, uncompromising woman, having to play the role of mother and father in her son’s life, and she lived a hard life.  The last home basketball game, we did senior recognition the same way we do it here: seniors were introduced with their parents and walked out to half court together. The problem was this boys’ mother had become very sick,  even hospitalized at one point, and wasn’t supposed to come to the game.  She couldn’t really walk, even. But nothing could have kept her away, and she showed up in a wheel chair. When the boy was announced, instead of walking out with his mom, he walked across the court to where his mother was sitting, and very tenderly, helped her from her wheelchair to her feet. It took some time for her to stand, and the gym went silent. When she finally stood up, the boy took her arm  into his and stood with her, proudly. The moment was very moving to everyone in the gym, because this young man, who played basketball with such toughness, treated his mom with such reverence.

So three stories about three moms. But what do they say about motherhood? First, as in the case of the boy with learning disabilities, a mother’s love and attention can empower us to achieve great things, far beyond our natural abilities. Second, mothers compel us to be honest—with others, but just as important, honest with ourselves. Third, moms inspire us to be reverent and kind.

Seniors will graduate this Saturday, and JPII will become their “alma mater.” That’s an interesting Latin term, which means literally “nourishing mother.” I think long ago people realized that good schools are a lot like good mothers. I hope, in any event, that's been true of your experience of JPII--that you've been nourished to achieve and to extend yourself, that you are challenged to be truthful with yourself and others, and that you appreciate life, revering the people you meet, grateful for the opportunities and blessings God has given you.

As we close out the year and begin to prepare for exams next week, I hope you’ve found JPII to be a true “alma mater” this year and over the course of your high school careers so far. This is the last assembly that I'll be part of as your headmaster at JPII. I'd like to ask as we move on, that we sing our alma mater one last time together.

What a wonderful speech! I was really moved by the stories those 3 mom's, and can especially identify with the first one. JPll will surely miss you!