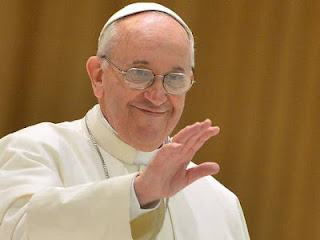 Last Wednesday, you watched a historic event in this auditorium, the election of Pope Francis as the 266th pope of the Catholic Church, dating back to St. Peter.


What makes his election "historic" is he is the first ever Latin-American to be named pope, the first non- European pope in 1,000 years, the first Jesuit and the first pope to take the name “Francis." Over the course of the last week’s news cycle, we’ve been able to listen to many talking heads explaining the significance of all these firsts.

What interests me the most, however, isn’t the reaction of journalists, theologians, or even clerics but that of the common, ordinary people of Buenos Aires, Argentina, where he had been auxiliary bishop and archbishop since 1992. I’d like to read an excerpt from an A.P. story written by a correspondent from Argentina who does a nice job of presenting their point of view:

BUENOS AIRES, Argentina — For more than a billion Roman Catholics worldwide, he's Pope Francis. For Argentina's poorest citizens, crowded in "misery villages" throughout the capital, he's proudly known as one of their own, a true "slum pope."

Villa 21-24 is a slum so dangerous that most outsiders don't dare enter, but residents say Jorge Mario Bergoglio often showed up unannounced to share laughs and sips of mate, the traditional Argentine herbal tea shared by groups using a common straw.

People here recall how the Buenos Aires archbishop ditched a limousine and would arrive on a bus to their little chapel; how he sponsored marathons and carpentry classes, consoled single mothers and washed the feet of recovering drug addicts; how he became one of them.

"Four years ago, I was at my worst and I needed help. When the Mass started he knelt down and washed my feet. It hit me hard. It was such a beautiful experience," said Cristian Reynoso, 27, a garbage collector trying to kick a cocaine addiction through the church's rehab program.

"When I saw the news on the TV, I began screaming with joy, and look, I'm still trembling," Reynoso said. "El Chabon (The Dude) is so humble. He's a fan of San Lorenzo (the soccer club), like me. You talk to him like a friend."

Long after he became a cardinal in 2001, this "prince of the church" wore a simple black T-shirt with a white collar. For many at the slum's Virgin of the Miracles Church, it's nothing short of a miracle that their friend is the pope.

"He was always part of our slum," housewife Lidia Valdivieso, 41, said after praying while resting her palm on a statue of St. Expeditus, patron saint of urgent and impossible causes. Her 23-year-old son has cerebral palsy and is learning carpentry at the church's technical school.

"When I heard the news I couldn't believe it. Having a `papa villero' (slum pope) is the most beautiful thing that can happen to us. I still remember him going on long walks through our muddy streets or talking to our children," Valdivieso said.    (By LUIS ANDRES HENAO).

(For a similar article, go here.)

Given our new pope’s passion for the poor, it’s no accident that he chose to take the name “Francis,” after St. Francis of Assisi, a saint who was originally born from a wealthy Italian family, but gave all of his wealth away and became known as a saint for the poor, eventually beginning the Franciscan order, whose special ministry remains to this day to work among poverty-stricken areas.

You are old enough now to appreciate subtlety. Much of the pomp and circumstance, the papal dress, the pope mobile, the Swiss guards, the ceremonies and the pageantry convey the papacy as a kind of regal position, typical of princes or kings. A pope who rides busses, a pope who asks for the tens of thousands in St. Peter’s square to pray for him before he gives them his first papal blessing, a pope that dresses simply, talks plainly, spends time with the poor in slums, laughs and smiles –these are not signs reminiscent of princes or kings, but of a man from Galilee.

May the Lord bless our new pope, and may we be encouraged in our Christian faith by his leadership and example.