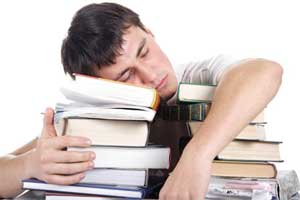 We all want it. We don’t get enough of it. We are less without it.


A couple of weeks ago, I was listening to students in Dr. Noah’s class make a presentation on why school should begin later—the arguments, incidentally, were very compelling—but at least three presentations made the point that students don’t get enough sleep at JPII partly because they regard sleep as a luxury—that if they’re getting more than 5-6 hours on a weeknight, they feel guilty about it, as if they were wasting time, or being lazy. (The science, by the way, says teenagers should be getting 8-10 hours of sleep each night. I’d wager a bet that almost NONE of you come close to that.)

Part of the problem is we’re all too busy. The forty-hour work week is no more; the average American works 46 hours/week, almost the equivalent of an extra day, and almost 40% of America works in excess of fifty hours on average. But it’s more than that. The promise of technology was to make our lives simpler and more efficient, but it’s also made us slaves to the present. It’s hard to have a five-minute, uninterrupted conversation with someone without that conversation being interrupted by a text message or phone call. We’re annoyed if we don’t get back text messages back within a few seconds of sending it. The modern day problem of texting and driving is just an extension of the same thing: it’s as if we’re wasting time in the car, merely driving somewhere, when we could be multi-tasking.

I feel badly for those of you who are dating: It used to be that if your boyfriend or girlfriend called on your home phone or dorm phone and you suspected it was him or her and didn’t feel like talking, you just didn’t answer it, pretending you weren’t there. Occasional distance is sometimes good for relationships. But with cell phones or texting, if you don’t answer, he or she knows you’re just ignoring the call. So you’re always “on call. “

None of this is healthy, really. Dr. Noah will tell you it’s not just that we all go to bed too late. It’s that we sleep with our cell phones on, that before we’ve gone to bed we’ve likely spent hours in front of computer screens, and that the light from those screens resets our body clocks so that even when we lay down to rest we lay there wired up, unable to fall asleep quickly. The quality of our sleep has diminished in this country, which is why sleep doctors like Dr. Noah have such successful practices.

Experts say we can do some practical things to improve both the quality and quantity of our sleep, and I pass these on to you:

Sleep is NOT a luxury.  It’s how we regenerate. It’s how God made us. There's nothing better than putting our head down at night on a soft, fluffy pillow and allowing ourselves to slowly drift away. Why we fight bringing ourselves to that point, I don't know. But let's fight it less!
Posted by Fnwchs at 9:39 PM