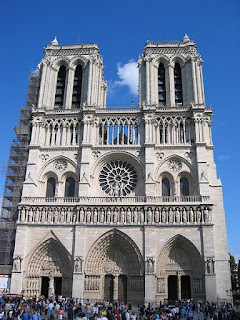 Despite an affinity for technology, I resisted the temptation to set up a Facebook account. I have a hard enough time keeping up with a cell phone, work phone, two voicemails and three email accounts and worried that Facebook would simply add to my “to do” list. But I relented recently, mostly because as I get older I am becoming more nostalgic, and wanted to find out what some of my old high school friends were up to. It’s been a while.

Something unexpected happened within a few days of starting the account. Dozens of former students, now married and in their late twenties and mid-thirties, began to send me “friend” requests. “How are you doing, Mr. Weber?” (It’s hard for thirty-somethings, even, to address their former principal as “Faustin”). It’s been fun catching up with them, learning about their spouses and families, what professions they are now in—to see, really, how they’re doing now 10 or 20 years removed from high school. Since the last time I really knew them was in high school, it’s like I’ve shot twenty years into the future with them—a rare gift for an educator, since most of the time we are "prophets of a future not our own,” (Oscar Romero) and don't often get a chance to see the final results.

One young man, now in his mid 30’s, gave me particular pause. I remember him as a freshman. He was overweight, sulky, and unhappy with his life; if I recall correctly, his parents had recently divorced. Each day he would shuffle into my freshman English class, sit in the back and brood. But he had a bright mind, and with pushing and prodding from his teachers over the course of four years, he slowly became more willing to engage in class, more willing to risk relationships with his classmates, more comfortable in his own skin. Fast forward twenty years now. This young man is happily married, with two children, one of whom is now nearing middle school age. He has a good job that he seems to love, if his posts are any indication. He seems happy.

One of the themes of my remarks to our faculty this year is that we are “building cathedrals.” It reflects back to the story of two medieval bricklayers, one of whom is miserable, doing the “same damn thing over and over,” the other of whom seems to truly to enjoy his work. When the second is asked why he enjoys what his co-worker detests, he says simply that he is “building a cathedral.” Teaching—I guess any profession--is a lot like bricklaying: there’s a tedious side to it, and if we lose sight of our larger purpose, it can wear us down.

But building cathedrals takes a long time! Generations of cathedral builders didn't get to see the fruit of their labor: It took 182 years, for example, to build the Cathedral of Notre Dame in Paris (see above). The greatest gift for an educator, then, is to get a glimpse of the role they played in the life of their students many years later.

They climbed on sketchy ladders towards God,
with winch and pulley hoisted hewn rock into heaven,
inhabited the sky with hammers,
defied gravity, deified stone,
took up God's house to meet him,
and came down to their suppers and small beer, every night slept,
lay with their smelly wives,
quarreled and cuffed the children,
lied, spat, sang, were happy, or unhappy,
and every day took to the ladders again,
impeded the rights of way of another summer's swallows,
grew greyer, shakier, became less inclined to fix a neighbor's roof of a fine evening,
saw naves sprout arches, clerestories soar, cursed the loud fancy glaziers for their luck,
somehow escaped the plague, got rheumatism,
decided it was time to give it up, to leave the spire to others,
stood in the crowd, well back from the vestments at the consecration,
envied the fat bishop his warm boots,
cocked a squint eye aloft, and said,
"I bloody did that."

Perhaps there’s a kid in our classes right now that is really difficult to work with. We can’t break through. My prayer is that we will persist in our efforts, so that one day, when we see this young man or woman twenty years from now, happily married, perhaps, or gainfully employed, we can say to ourselves, with supreme pride and satisfaction, “I bloody did that.”
Posted by Fnwchs at 11:50 AM