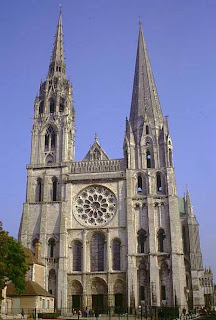 The story is told of two brick-layers, working on a project together in medieval France. One is a miserable cuss, constantly complaining about the monotony of his job: "Brick after brick, same thing, over and over, " he often grumbles. But the other mason is happy, takes pride in what he is doing, and even whistles while he works. This fascinates their foreman, who finally asks the second why he likes his job so much. “Why?” he responds. “Because I am doing something important. I am building a cathedral! “

It's easy for all of us, within the scope of raising or educating children, or within our jobs and the built-in stresses of meeting deadlines, handling complaints, or dealing with difficult people, to lose sight of the big picture, the "why" of what we're doing. It's too easy to become like the first mason.

On the occasion of our tenth anniversary year of Pope John Paul II's opening as a high school, we spent a lot of time this summer--at our leadership meetings, during our Board retreat, in our pre-year faculty meetings--talking about the fundamental beliefs that inspire us at JPII, our "why." We were prompted to do this on the basis of Simon Sinek's book, "Start with the Why," a succinct summary of which is contained in this video:


What is the "why" of JPII? Our summer discussions were lively, inspirational, and full of story telling.

Mrs. Ebelhar told the story of when Golden Tate walked into her choral classroom for the first time as a freshman. Like all JPII students, he had to take three years of a fine arts class, and "singing" seemed like it would be the easiest and least objectionable. But he found out on that first day he'd have to learn to read music, sing in parts, and perform in public concerts. He wanted out--he was a football player, not a chorister! But he stayed, grudgingly, mostly because there weren't any other better alternatives. Fast forward to the end of Golden's junior year. He had completed his three year requirement, but he begged Mrs. Ebelhar to place him in the advanced men's choir as an elective for his senior year, where he would have to wear a tuxedo and perform. Mrs. Ebelhar agreed, of course. So even while Golden was being recruited by every university in the country as one of the nation's best high school football players, he also sang with great pride in the advanced men's choir.

There were many other stories. A coach told the story of a senior boy who was a C student when he came to JPII as a freshman-- in his mind, to play a sport. He's never made less than a B since, inspired to work hard in a culture where it's "cool to be smart," in the words of a recent graduate. An admissions counselor relayed the story of a young man who so shy during the admissions interview he could only mumble short phrases, but four years later, graduated a confident, happy, young man with a scholarship to one of our nation's best universities. As a faculty, we reminded each other, through these "before and after" stories, how privileged we were to watch God's grace work so powerfully in the life of so many of our students.

Each administrator, each Board member, each faculty member, described the "why" of JPII a bit differently this summer. As parents, you may have your own version. But the essence of the "why" in what we're doing is eloquently described by C.S. Lewis in a short passage from Mere Christianity:

Imagine yourself as a living house. God comes in to rebuild that house. At first, perhaps, you can understand what He is doing. He is getting the drains right and stopping the leaks in the roof and so on; you knew that those jobs needed doing and so you are not surprised. But presently He starts knocking the house about in a way that hurts abominably and does not seem to make any sense. What on earth is He up to? The explanation is that He is building quite a different house from the one you thought of - throwing out a new wing here, putting on an extra floor there, running up towers, making courtyards. You thought you were being made into a decent little cottage: but He is building a palace. He intends to come and live in it Himself.

There is a great optimism in students at JPII--in who they are and what they can become. We believe if they are immersed in a culture of high expectations, if they are supported by adults who model right behavior and pick them up when they stumble, if they belong to a team, activity or club that they are passionate about with others who share that passion, and if they are invited to grow in their faith through many opportunities for worship and serving others, God will work in their life and help them flourish to become something special.

God’s dreams for us far exceed our own. We see only limits, whereas God sees infinite horizons. No matter where they begin, when teens are immersed in a culture of optimism, expectation, faith and support, they are elevated to look above the walls of their perceived limitations to see beyond what they once believed about themselves, beyond the cynicism of what society believes, even beyond what we who love them may see and hope for them.

That's why you sacrifice to have your kids here. The great joy of being a teacher or a parent at JPII is we get to witness this transformation -a liberation, even- as young men and women grow in confidence borne from achievement and as they begin to think differently about their futures.

Sure, there's going to be times when it's a little uncomfortable. As C.S. Lewis' beautiful analogy reminds us, when God starts "knocking about the house," it can be painful. Kids may be asked to work harder than they want, they may get grades from time to time that disappoint them, they may get irritated with us, much in the same way they get irritated with you as their parents when you set limits. Raising teens is not for the faint of heart! But it's all worth it. It's worth it because of the kind of young men and women they will become.

We, too, as parents and teachers, are building cathedrals! May God give us the wisdom to build well.
Posted by Fnwchs at 8:23 AM

I can't even begin to articulate how relevant this post was to me as a fellow Catholic school educator.

Why do we teach for subpar salaries, spend the extra hours in the classroom with students, volunteer for numerous extracurricular activities? This sure cannot be explained by the "how" or the "what."

No...it is because we know, in our decision making process, WE ARE BUILDING CATHEDRALS. We are changing lives.