Education Far Beyond the Classroom

Good morning. I hope everyone had a great weekend.

The next month is going to be pretty incredible here at JPII.

Tonight we kick off our INK and BLOOD exhibit, which traces the history of writing and the development of the bible from the Dead Sea Scrolls to the modern translations of today. In our library are now housed 5,000 year old cuneiform clay tablets, fragments of the Dead Sea Scrolls, considered the most important archeological discovery of the 20th century, illuminated manuscripts dating to the middle ages, large Torah Scrolls that are over 800 years old, a working replica of the Gutenberg press and too many other amazing things to list here. It is a WORLD CLASS, museum quality exhibit, and we are humbled and blessed to have the privilege of showing it to all of Nashville and expect many to travel distances to see it.

Tonight will be opening night. We're inviting various dignitaries around Nashville to attend--a black tie affair. My thanks to all of you who have volunteered to make tonight special with your talents in music and art. Beginning tomorrow, we'll start having bus loads of students from area schools come to the exhibit in the mornings and three night times/week. On Monday and Thursday evenings and Sunday afternoon, we're also inviting the general public. We not only want to show the visitors Ink and Blood, we want to showcase our school and even more importantly, showcase you. For the next three weeks, I ask that you are especially hospitable to our guests, whether they be adults or 7th graders. You may bump into them in our bathrooms, find them wandering lost in our hallways, perhaps even eating in our cafeteria. Please stop what you're doing and make them feel welcome, give directions if they need it, and at the very least, smile at them as you pass by.

The most important audience to view the exhibit, however, is YOU. Dr. Noah, to whom we are indebted for this exhibit, especially wants this to be an opportunity for you to learn first hand about our history, both as Christians who read and hold sacred the Scriptures, but also as heirs to a culture that has been shaped by the biblical writings. The exhibit will be closed to us in the mornings, but I certainly invite you, if our visitors have left, to peruse the exhibit on your own or with your friends at lunch time. Remember to keep decorum when you're there. Yes, it's our library. But for three weeks, anyway, it's a museum housing world class artifacts, and I ask that you act accordingly.

You are welcome to peruse the exhibit during your lunch period. For the next week or so, if there is a high demand, we'll give seniors priority admittance, then juniors, sophomores and freshmen. (Sorry freshmen, but you'll be seniors one day.) The exhibit will be closed at dismissal each day to clean up and get ready for the nighttime tours. In addition, each of you will be visiting the exhibit formally in your theology classes over the next three weeks. My advice to you is to sponge it up! You will get very few opportunities like this again. 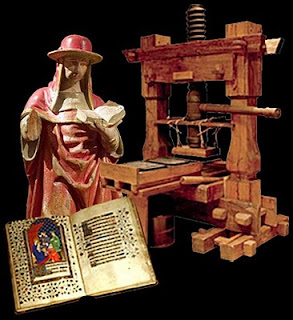 Looking further down the road, there's some other fantastic things that are going to happen at JPII this spring. April 2 marks the fifth anniversary of our namesake's death, Pope John Paul II. Usually, the cause for canonization cannot begin until the fifth year, but Pope Benedict waived the five year wait requirement for JPII shortly after he became pope and rumor is that JP2 may be beatified on April 2. Beatification is the step just below sainthood. It would mean Pope John Paul is "Blessed John Paul II" on his way to becoming "Saint JPII". Down the road, we may even have to change our school's name from "Pope" to "Saint". In any case, this fifth anniversary is a big one, and since we're named after him, we've lined up two events to celebrate it. We have invited one of the country's most famous theologians to speak at our first "Pope John Paul II Distinguished Lecture" series. His name is George Weigel. Among Mr. Weigel's many accomplishments, he wrote THE definitive biography of JPII, called "Witness to Hope" and he'll be speaking in this auditorium the night of March 9. You're invited to come.

Also that night, we will be unveiling something that's really interesting. When JPII was built in 2002, Bishop Kmiec--the bishop of Nashville just before Bishop Choby-- asked the Vatican if it would give us something that belonged to the pope to connect us to him. Some of you may know that the pope was an avid skier and while pope, often dressed up in disguise with his friends to go skiing in the Alps for vacation. So we were delighted when we received from the Vatican the pope's ski-jacket, which we have now made into a very nice display just outside the chapel. I think some of you may have seen it as it was going up, but we've since veiled it and will unveil it the night of the Weigel talk.

So there's some pretty spectacular things happening around here this spring. Soak it in and thank the Lord for the many blessings he's given us here.