Raising Teenagers: Not for the Faint of Heart 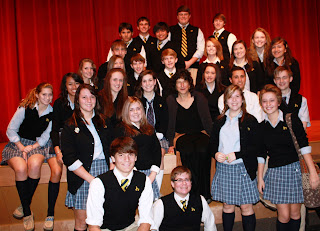 One advantage to working in a high school for 25 years is I've met some pretty incredible parents. With four children of our own (now aged 22, 20, 18 and 14), my wife Diane and I paid close attention to how these parents raised their children and shamelessly stole ideas from them. Imitation is the sincerest form of flattery!

Here are some of the things we've "borrowed" that have worked well for us:

1) We’ve tried to say “no”. A mother I once knew received a Christmas present from her five children when her youngest child was a senior in high school. It was a plaque, inscribed with the words “World’s Meanest Mother”. The text of the plaque listed all the things she never let them do that “everyone else’s mother” did: stay out past midnight, go to senior prom parties where there would be drinking, miss school on days because they were tired, etc. And at the bottom of the plaque, they concluded with the simple words “Thank you Mom, for loving us so much”. I believe that kids want their parents, deep down, to set limits for them, much the same way we admire the teachers or coaches in our lives who held the line with us.

2) We’ve tried to pick the right battles. As a father I’ve failed on this more often than my wife—something about having a son with long hair is annoying to me! But hair length doesn’t matter. Hard work matters. Integrity matters. Treating people with respect matters. The art of being a parent with teens is to be flexible on the small stuff and give them some room. As one wise parent once told me. “Teenagers are like bucking broncos. If you try to ride them, their natural instinct is to buck you. Instead, parents should build fences that give the horse some freedom, but which lead them to the right place." This may be the single wisest statement I've ever heard about raising teens.

3) We don’t let our kids spend the night with friends. Ever. As a principal I’ve observed that if teenagers drink (and the stats say 70% do!), it’s most often when they’re overnight with someone else, not accountable to their own parents that evening. What they often do is play a shell game: each teen tells his parents that he’s staying at the other one’s house and then both spend the night at a third person’s house whose parents aren’t home or who don’t care. Drinking is a huge temptation, even to the very best kids. Do our children like this policy? No, they hate it, but it gives them an excuse to say “no” when tempted and it helps shield them from the more serious stuff. They’ve survived.

4) They can’t quit something once they start. All four of my children have been on terrible teams with poor coaches. Doesn’t matter, they can’t quit. If they finish the season and never want to play that sport again, that’s fine (my oldest quit playing baseball at 11, which killed my soul because he was good). I remember once talking to a cheerleader who decided to quit the cheerleading squad in mid-season. I expressed concern to her that she often gave up on things and encouraged to her to finish the season out‐‐it would help her in more important things in the future like college, a job, a future marriage. Her mom was furious with me. Sadly, 15 years later, I heard she’s divorcing her third husband.

5) We’ve tried to be faithful to family prayer. Beginning when our children were young, we’ve tried to pray as a family before getting ready for school. It was never “high church”! Our standard routine was to make each kid offer thanks (“Thank you Jesus for…” when our kids were younger), read Scripture (our family uses the Church’s readings of the day), offer any special intentions, and then finish with an “Our Father or Hail Mary”. The whole thing takes about 5 minutes. Even now, with our two youngest in high school, we continue with this tradition.

6) We’ve had to say we’re sorry and tried to be open to changing our minds. Sometimes we make the wrong decision and rather than “stand firm” as a pretense for infallibility, we’ve had to change course and sometimes ask our kids to forgive us. It seems like I am in this position more often with my lawyerly daughter than my boys, but she’s right to press me sometimes--I tend to be overprotective of her. Being parents of teens is not for the faint‐hearted!

Older parents always told Diane and I when our children were young, in dark and ominous tones, “just wait until your kids turn into teenagers”. The truth is, raising teens has been great. There is no greater joy than watching your children turn into young men and women, to laugh with them as young adults, to smile inwardly when you recognize a point of view or quirk that was passed from you to them (but don’t acknowledge it out loud with them!), to see God’s grace living with them, pushing them to be the men and women he intends them to become. Do we have perfect kids? Hardly. But it's not their fault--they don't have perfect parents!

The truly hard years, we’ve come to realize, were the years of being on‐call 100% of the time when our children were in diapers. To those parents, Diane and I have this to say: The best is yet to come!
Posted by Fnwchs at 5:12 PM

Thank you for your blog. We have three kids aged 13, 8 and 1. Our 13 year old daughter has always been headstrong since she was young. Now that she is in her teen years, she has become more challenging. Your insights will definitely help us, as we go through these trying years.

Welcome! I grew up in Mobile, Al, attended St. Ignatius and Most Pure Heart of Mary Catholic elementary schools, graduated from McGill-Toolen Catholic High, went to the University of Notre Dame for undergraduate and graduate school, served at Montgomery Catholic Preparatory School in Montgomery, AL as teacher, principal and president for 23 years, then as headmaster of Pope John Paul II High School in the Nashville, TN diocese for 7 years. I was hired in July 2015 to start a new Catholic high school, St. Michael, in Fairhope, AL, which opened in August, 2016. Seven years later, in 2022, I was named president of Prince of Peace Catholic in Plano, TX.

I began this blog in 2005 to share my thoughts about Catholic education, issues in the Church, and the people I've met. These articles represent my own personal views and do not necessarily reflect the views of the school, Church or diocese for which I work.