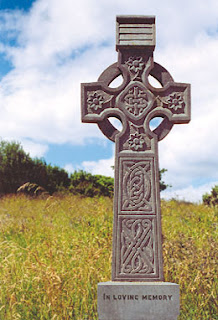 This is Mr. Weber's assembly address to JPII students on November 2, 2009.

Today is All Souls Day in the Catholic Church, a day to remember and honor our deceased love ones. We pray for them today, but we also give them honor by remembering the values that they stood for and trying to make them our own.

Who in your life—a grandparent or great-grandparent, perhaps, an uncle or aunt—has died but left a mark on you in some sort of important way? I’d like you to think of that person this morning.

For me, it was my grandmother. She died 20 years ago, but we were very close. She was a little woman, only 4’ 11’’ but she was strong in stature and personality. Her mother died when she was only 3, and since her father was an astronomer (known for having their minds in other galaxies) and she was the oldest girl in the family, she had a lot of responsibility to raise her younger siblings.

They were poor, so she went to work when she was 14 to help out, keeping the books for a local grocer after school. Her younger brother was apparently brilliant but had a gambling problem, so when he went to Washington D.C. in the 1920’s for law school, her father asked her to go with him so she could keep him out of trouble. She did as her father asked, but when she got there, she decided to enroll in the law school herself---something very unusual for a woman to do—and received a law degree 3 years later. No one would hire a female lawyer in the 1920’s except for the federal government, so she ended up working for the Department of Immigration for 15 or so years. During that time she also received a private pilot’s license, something else that was unheard of for a woman, but apparently she was dating a man at the time who was taking pilot lessons, and as she had done for law school, she decided to earn a license for herself. She never married that man, however, because when she went to visit his family in Georgia, she found out that they were virulently anti-Catholic and that was the end of that.

In fact, it wasn’t until she was 38 that she met my grandfather and married—18 years later than the typical woman of her day. He was a naval officer, a graduate of Annapolis, who had been married before and had 3 teenage children, but his wife had died of an illness 2 years earlier My grandmother became pregnant for the first time at age 39 with my mother just as World War II was breaking out, so less than 6 months after her marriage, my grandfather was called to war, leaving her all alone, pregnant, with 3 teenage step children. The WWII years were tough years for her. They moved constantly to where-ever my grandfather was stationed—San Francisco, Hawaii, back to the east coast—but they saw very little of each other during that time. He was at sea when my mother was born, at sea when she took her first steps, at sea when she first went to kindergarten. But my grandmother was faithful and strong and survived. She had one other child when she was 45, my aunt, who now lives in Huntsville.

Fast forward to when I remember her. She settled in Auburn, AL, about 5 hours away from Mobile, AL, where I grew up. My grandfather died in 1968 when I was only 6, so I don’t have much memory of him, but she would visit us often, and we loved it. She’d come down for our birthdays and other special events. She’d usually take us out to eat, something we didn’t do very often and she often gave us presents for no other reason than she wanted to. I remember she drove a big Cadillac, and since she was so short, all you could see over the dashboard was her head, and that, I think, partly explained the fact she was a terrible driver. She often bragged she had never been in a wreck, which only proved to me as a kid how skilled a driver every one else on the road must have been! She never stayed with us for more than 2-3 days before she whisked back off to Auburn, and even as young child I had this sense she was a very independent, self-reliant woman. She was always interested in us. She wrote letters to us and often included checks as gifts, which made her a pretty cool grandmother when I was a teenager.

Her generosity extended beyond our family. She cared for people in nursing homes, even eventually for those who were younger than she. She gave to charitable causes, a fact apparently well known to charitable causes, because she received literally 20-30 mail solicitations per day. She was a pillar in her church at St. Michael’s in Auburn.

She wasn’t perfect. She was an impatient woman. I remember when we were leaving for Auburn with her and got no further than downtown Mobile. There was an accident inside the Bankhead tunnel, and we got into a huge traffic jam, with miles of cars before us and behind us. After going no-where for 30 minutes, she snapped and just started honking the horn over and over for 20 minutes. When we finally crept forward close enough to be within earshot of the policeman directing traffic, she rolled down her window and let him know how incompetent he was in no uncertain terms. Meanwhile, my sisters and I, mortified, hid under the seat in the back.

God was merciful to her in the last years of her life. Given her fierce independence and fiery nature, she would have not tolerated a long sickness. She was in her 80’s, but she woke up that morning at 6 a.m. as she always did, went swimming for exercise in the Auburn city pool at 7 a.m., then delivered a cake to the nursing home she had made the night before. She wasn’t feeling well—she was having trouble breathing—so she decided to go to the doctor later that morning, who told her she must immediately check into the hospital. It turns out she had cancer. She checked in on Thursday afternoon, the same day she had been swimming at 7 a.m. and died that Monday, just long enough for all of the family to come and see her for the last time.

As you think of that person in your life you admired but who is now deceased, ask yourself, what was their best trait? Their best virtue? We can best honor our deceased love ones on this, All Souls Day, by taking this virtue and working hard to make it our own.

I admire my grandmother for her generosity to others, her fierce, fiery independent spirit and her strong work ethic. I hope that I can be a person worthy of being called her grandson by being just as generous and working just as hard.
Posted by Fnwchs at 7:35 PM