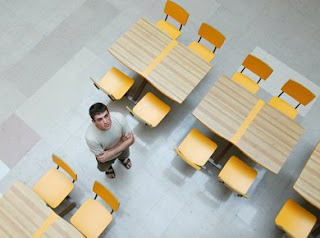 Listen carefully and hold your opinion until I finish.

The new discipline code is as follows. Disciplinary incidents will be classified as either Class A, Class B or Class C violations.

Class B violations are those which seriously disrupt the educational process in the classroom or other areas.

Rule B08: Criminal Mischief/Pranks/Vandalism
Rule B09: Defiance, Disrespect, and Opposition to Authority or Rule B10: Willful, Persistent Disobedience
Rule B16(A): Possession of Cellular Telephone or Other Communications Devices
Rule B20: Harassment or
Rule B31: Threats/Intimidation
Rule B30(A): Inappropriate Display of Affection/Touching
Rule B30(B): Sexual Offense
Rule B32: Possession or
Rule B33: Sale or
Rule B34: Use of Tobacco Products, Matches, or Lighters
Rule B35: Trespassing
Rule B36: Truancy/Unauthorized Absence/Tardies
Rule B58: Other School Rules and/or Board of Education Policy

Consequences for violating Class B violations will include suspension not to exceed 3 days or, if repeated, a recommendation to the principal for expulsion.

Violations of Class C offenses will result in a minimum of a 5 day out of school suspension up to expulsion and the filing of a police report for the student committing the illegal act.

More detail is available on line. For example, a weapon is defined as:

OK, I asked you to hold your opinion until the end. So what do you think? I don't like it either. I guess we won’t adopt the new Code of Discipline for Montgomery, AL Public Schools here at JPII.

I outlined this policy in some detail for a reason. G.K Chesterton, a famous Christian writer, once said:

When you break the big laws, you do not get liberty; you do not even get anarchy. You get the small laws.”

I think the policy I just outlined is a pretty good indication of what he means. If we can’t agree that we’re going to be a school where honesty, integrity and respect rules the day, then we’ll have to be a school ruled by laws that are increasingly detailed and specific, written by liability lawyers which must define what the word “knife” means.

I don’t want JPII to be place ruled by small laws—and neither do you. Rather, we want to stay committed to the big things—the ideals for which this institution stands.

What we stand for is contained in our Veritas pledge, which, for the sake of the 189 students who are new, we recite from time to time at our assemblies:

I promise before God and members of this community that I will be a person of integrity who will not lie, steal, cheat, plagiarize or break the bonds of trust that define this community. I will take responsibility for my decisions. I make this promise in order to build a community of trust and integrity with my brothers and sisters at JPII. (JPII’s Veritas Pledge)

May God give you the integrity to live by what you promise.