Eulogy for a Friend 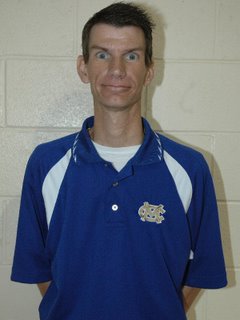 Note: Tim Turner, long time youth coach in Montgomery, died on April 13 at the age of 36, after fighting lung cancer for almost fifteen months. He neither smoked nor drank. Despite being in and out of the hospital in his last few months, “Coach Tim” was able to coach his son’s baseball team on April 12, dying later that night.

It has been an honor to have known Tim Turner. I say that as his friend, but also in my role as president of Montgomery Catholic Preparatory School and on behalf of the entire Catholic community of Montgomery.

I first met Tim ten years ago when he and his good friend Greg Kegley became my 9 year old son Faus’ YMCA football coach. Faus had started playing football a year earlier and he kind of liked it, but playing for Tim and Greg was a whole new experience. They were tough on the boys. They were loud! They challenged the boys to play hard and to hustle. They wouldn’t accept excuses. But it was evident to all of us parents, and to the players themselves, that these guys loved the kids. They brought excitement and joy to football. From the time my kids were very small, our family has begun each school day with a quick morning prayer. As part of that prayer, I ask each of my children to thank Jesus for something in their lives. For the entire football season that year, Faus said “Thank you Jesus I have football practice today”. I played football when I was young, but I never remember thanking God I had practice on a given day—but such was the joy of playing for Tim and Greg. Not coincidentally, they were a very good football team, beating teams by an average of 5 touchdowns that year. I am very grateful as a father that both of my older sons played for these men—Faus, in both the Y and the Seminoles, and Aaron, through the Seminoles. Tim and Greg were a special team together.

Over the years, since Aaron and (Tim’s son) Hunter were the same age, I coached both with Tim and against him as a baseball coach at East Montgomery. I always noted on my calendar when I played Tim Turner’s team. It didn’t matter how good you THOUGHT your team was on paper; somehow, Tim’s team was going to fight you, and more often than not, beat you. All the managers who've coached against Tim know what I mean: Tim did more with less than any other coach I’ve met, and he did so because of an infectious desire to win and a scrappiness which his teams ALWAYS seemed to have--no doubt a reflection of their coach.

As Hunter and Aaron began to approach middle school age, I talked to our athletic director, Tony Taylor, suggesting that he'd be a good coach for our program. I remember predicting if he hired Tim, our middle school football program, which had fallen on hard times, would be turned around within three years. Tony interviewed him, liked him, hired him, and as he got to know Tim better and better, made Tim our MS basketball coach, baseball coach, and whatever else we could give him. In Tim’s first year as our football coach, our team won (I think) one game. In year two, two games. This fall, despite the fact that Tim had been fighting cancer for nearly a year, our MS football team went 4-1-1, the best record in our middle school football program’s history.

Yes, he was that good of a coach. But if I left it there, I wouldn’t be saying enough about him. Tim Turner was an even better man.

He was one of the most genuine, honest persons I’ve ever met. He didn’t pretend to be something he wasn’t. He didn’t seek to impress people or let what others thought about him change his behavior. He was simply “Tim” or “Coach Tim” if you were one of his players. I suspect more than anything else, that’s what we respected him for and why we found him to be such a compelling figure.

If you looked around the Church at his funeral today, you saw an incredible cross-section of Montgomery: black and white, educated and less educated, rich and poor, Catholic and Church of Christ. Tim’s life transcended petty divisions, petty differences. What a great testimony of a life well lived that all of us were there together, praying for and honoring this man who had such a positive effect on our family’s lives.

I have two final remarks:

First, to Tammy, Hunter, Hallie and the entire Turner family: On behalf of Catholic, thank you for your tremendous generosity in sharing your husband and father with us. Coaching takes a lot of time, yet we’ve been very proud that he has walked our sidelines these last three years. Thank you Tammy, and know that the entire Catholic community stands behind you and your children and intends to see both Hallie and Hunter graduate from Catholic if you give us that chance.

Second, to all the players at his funeral today who had the good fortune to call Tim Turner “Coach” at some point in your life: Your presence at his funeral today is a tribute to your coach and a statement of your gratitude to him. But if you REALLY want to pay him tribute, then LIVE YOUR LIFE AS HE DID: with fundamental honesty, with a competitive drive to be the best, with a fighting spirit (even down to the last day of his life), and with a “no excuses and never-say-quit” attitude. If you live your life that way, you will be your coach's legacy, and despite his death at a young age, his life will continue to be a great gift to Montgomery through you.

May Coach Tim Turner’s soul and the souls of the faithfully departed rest in peace. Amen.

Post Script: I can't remember the Montgomery Advertiser having two articles about anyone's death on our sports pages who wasn't wearing a hound's tooth cap, but it ran two excellent pieces on Tim, which you can access: here and here
Posted by Fnwchs at 10:43 PM

Wonderful job of capturing the essence of the man. It would be so wonderful if MCPS(any school for that matter) had a coaching staff of all Tim's.